You are here: Home / Malawi Africa / Clean Water Provided by the Rotary Club of Joliet

The St. Joseph’s Centre would not be complete and effective without a nearby source for clean water. Who better than to provide funding for a deep well than Rotary, an international service organization with a nearly 100 year presence in Joliet, Illinois. With Rotary’s motto of “Service above self,” and Doug Spesia having been a past president of the Joliet Rotary Club, it seemed a perfect fit. 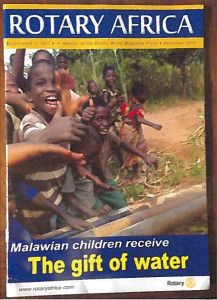 Shortly before the group departed for Malawi in June of 2011, the Joliet Rotary Club agreed to consider funding a clean water deep well at a location near the Douglas Spesia Centre. Then, while in Malawi in June of 2011, Lori Spesia attended a meeting of the Blantyre Rotary Club and met its president, Mr. Peter Nkata. During the meeting they discussed a partnership between the Joliet Club and the Blantyre Club to complete the deep well project near the Centre. During the visit with Mr. Nkata, Lori learned that the Blantyre Club had been involved in constructing several deep wells to provide clean water to people in rural Malawi.

After a presentation to the Joliet Club by Spesia & Taylor partner John Spesia, the Club’s Board of Directors approved funding for the deep well on July 21, 2011. Construction on the deep well was completed in October of 2011. Since the success of the first clean water project in Malawi, partner John Spesia has continued to lead efforts by the Joliet Rotary Club to construct more wells in the Thyolo region. They have been aided by the Limbe, Malawi Rotary Club and matching grants from the Rotary foundation.

In rural Districts of Malawi, Africa, literacy rates are as low as 60% and poverty rates are as high as 69%. There are also significant inequities between male and female students, with 80% more males than females completing secondary school or going beyond secondary school and 14% of females versus 8% of males never attending […]

On May 3, 2019, the third Rotary Global Grant project sponsored by the Rotary Club of Joliet and the Limbe, Malawi Rotary Club (with the help of Spesia & Taylor’s John Spesia and Brad McCann) was approved by Rotary International. The grant – which totals $117,148.00 – will go towards to providing essential services to people in the rural Thyolo and Mulanji Districts of Malawi, Africa.

ST. JOSEPH’S CENTRE, MALAWI, AFRICA SEWING FACILITY UPDATE In July of 2016, an exciting new project began at the St. Joseph’s Centre.  The project, designed and implemented by Fr.  Phillip Mbeta with assistance from the Montfort Missionaries, was to raise enough money to construct a new building where local villagers in rural Malawi could get […]

The media documentation of the constant domestic struggle occurring in Malawi, Africa makes it no surprise that the United Nations ranks Malawi in the 20 least developed countries in the world. This plight, although felt throughout the country, is arguably felt more so in the rural villages of Malawi simply due to their remote nature. […]

Doug Spesia was the senior partner of the Spesia & Taylor law firm for 20 years. He had a passion for world travel and a deep conviction to helping others. In 2003, Doug Spesia and his wife Lori travelled to Malawi, Africa to volunteer at a mission located in a small village called Namitembo. While […]

The St. Joseph’s Centre would not be complete and effective without a nearby source for clean water. Who better than to provide funding for a deep well than Rotary, an international service organization with a nearly 100 year presence in Joliet, Illinois. With Rotary’s motto of “Service above self,” and Doug Spesia having been a […]