Hiring experienced Appellate lawyers with a proven track record of success in the Appellate Courts and Illinois Supreme Court is essential to winning your case.

Whether you have obtained a favorable or unfavorable decision, an appeal may be the next step in the judicial process for your case. The attorneys at Spesia & Taylor have the skill and experience to handle all aspects of an appeal – and a proven track record of winning appeals. Our appellate team includes retired appellate court Justice Kent Slater, who served for 16 years as a judge in the Third District Appellate Court.

Partner John Spesia has over 25 years of experience in successfully briefing and arguing cases before the Illinois Appellate Courts and has argued and won cases in the Illinois Supreme Court.

Partner Christian Spesia has also successfully advocated on behalf of his clients in both the Illinois Appellate Courts and in the United States Court of Appeals for the Seventh Circuit.

Thornton v. Garcini, 237 Ill. 2d 100 (Ill. Supreme Ct. 2009)
In a landmark decision by the Illinois Supreme Court, Spesia & Taylor partner John Spesia won an appeal that resulted in an award of more than $1 million for the firm’s client. In its decision the Illinois Supreme Court held that expert testimony is not required to establish that a Plaintiff suffered emotional distress.

Lorenz v. Pledge, 2014 IL App (3d) 130137
After a jury found a sheriff’s deputy not guilty for causing a collision that resulted in the death of a 42-year-old woman, the family hired Spesia & Taylor to appeal the case to the Third District Appellate Court in Ottawa, Illinois. Spesia & Taylor won the appeal and the case was sent back for a new trial that resulted in a jury verdict of more than $4.1 million for the family.

Dayton v. McDonough County Sheriff’s Department, 2019 IL App (3d) 170698
Spesia & Taylor won a record setting $4.1 million verdict in favor of the family of a deceased 42 year-old mother of three. On appeal, the Third District Appellate Court upheld the $4 million dollar verdict and against the McDonough County Sheriff’s Department and awarded post-judgment interest which added more than $500,000 to the jury’s award.

Enbridge Pipelines (Ill.), L.L.C. v. Troyer, 2015 IL App (4th) 150334
Spesia & Taylor won a landmark decision in the Fourth District Appellate Court on behalf of its client Enbridge Pipelines in its effort to construct the Southern Access Extension Pipeline. The Appellate Court’s decision marked the first time that an Illinois appellate court ever allowed a pipeline/utility company immediate access to landowners’ properties to proceed with construction of a public improvement before a trial on just compensation. The decision, which the landowners labeled a common-law “quick take”, effectively prohibited the landowners from delaying the trial proceedings to secure settlements that exceeded the fair market value of the easements sought by Enbridge.

Commonwealth Edison Co. v. Will County Collector, 196 Ill. 2d 27 (Ill. Supreme Ct. 2001)
in a landmark decision the Illinois Supreme Court created a new standard to determine whether legislation could be retroactively applied in the context of collecting and accumulating property tax revenue.

Enbridge Energy, Limited Partnership v. Fry, 2017 IL App (3d) 150765
Landowners appealed from a decision by the Circuit Court of Will County setting the just compensation due to the landowners for pipeline easements at $12,700 – instead of the $340,000 sought by landowners. On appeal in the Third District Appellate Court, Spesia & Taylor was successful in upholding the trial court’s decision.

Enbridge Pipelines (Ill.), L.L.C. v. Hoke, 2017 IL App (4th) 150544
Spesia & Taylor prevailed in appeals filed by landowners in consolidated eminent domain cases in DeWitt County, Illinois. The Fourth District Appellate Court affirmed verdicts in favor of Spesia & Taylor’s client which set just compensation at $10,500 for pipeline easements necessary to construct Enbridge Pipelines’ Southern Access pipeline. In its decision, the Appellate Court rejected the landowners’ claim for $680,000 in just compensation which was impermissibly founded on the possibility that the fear and stigma associated with oil pipelines would influence the market value of their property.

Enbridge Pipelines (Ill.), L.L.C. v. Kuerth (Kuerth II), 2018 IL App (4th) 150519-B
Landowners filed a traverse motion challenging the public use and benefit of a pipeline project that had been certificated by the Illinois Commerce Commission. The Fourth District Appellate Court held that under the Eminent Domain Act the Commission’s certificate created a rebuttable presumption that the pipeline project was primarily for the benefit, use, or enjoyment of the public. Spesia & Taylor successfully argued that the landowners failed to rebut presumptions afforded to its client - a certificated common carrier by pipeline.

Aux Sable Liquid Prods v. Murphy, 526 F.3d 1028 (7th Cir. 2008)
Partner Christian Spesia and the team at Spesia & Taylor successfully upheld an injunction on behalf of the firm’s client Aux Sable Liquid Products, Inc., which prohibited a township road commissioner from imposing a restriction on the weight of trucks travelling on a township road to Aux Sable’s terminal. The Seventh Circuit Court of Appeals found that the township road commissioner’s attempt to limit the weight of trucks travelling to Aux Sable’s facilities was a violation of the federal Surface Transportation Assistance Act.

Norris v. Officers Serrato, Williams, Hall and the City of Joliet, 2019 U.S. App. Lexis 6612; 2019 WL 1034365 (7th Cir. 2019)
Spesia & Taylor Partner Michael Stiff successfully defended a police officer and the City of Joliet against a baseless civil rights claim arising from an arrest. The Seventh Circuit Court of Appeals affirmed United States District Court Judge Robert M. Dow’s decision, in which he had found that probable cause existed for the arrest.

Our attorneys are ready to handle all aspects of your appeal including helping develop a post-trial strategy to identify and preserve the most significant issues for an appeal. The appellate process is time sensitive so call us today at (815) 726-4311. 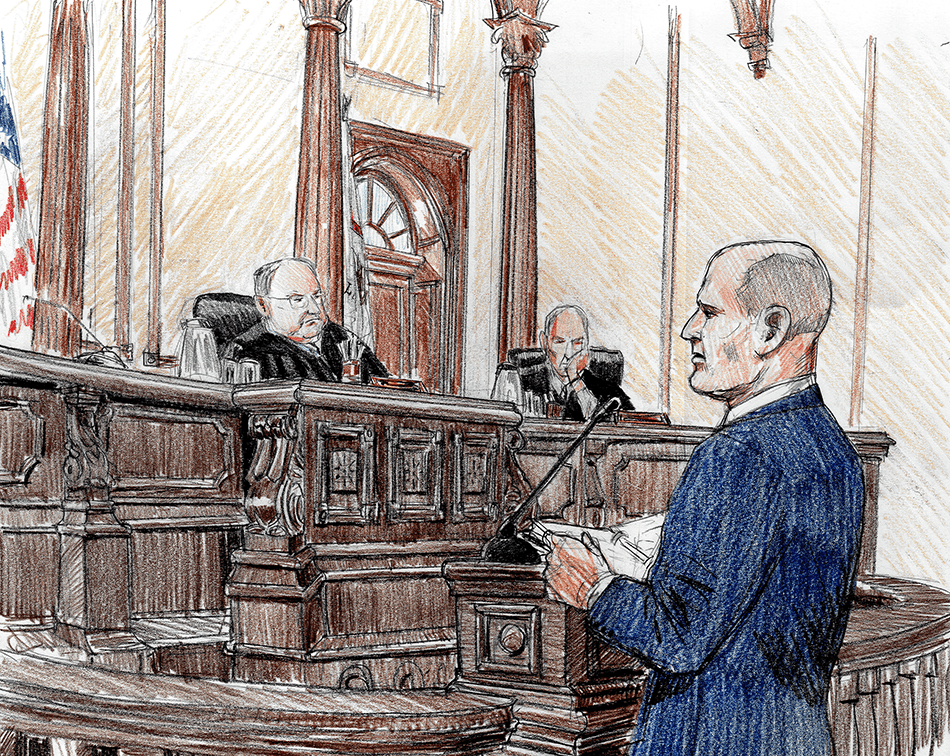 Above: Attorney John M. Spesia addressing the Third District Appellate Court in Ottawa during oral arguments. The Court ruled in favor of Spesia & Taylor’s client, which resulted in a $4.4 million dollar award.