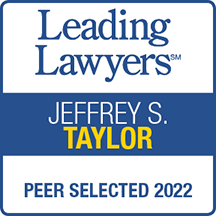 Mr. Taylor practiced at a large law firm in Chicago, where he represented multiple Fortune 500 companies throughout the United States in both federal and state courts. Through this practice he acquired experience spanning a wide variety of areas including catastrophic injury cases, employment law, business and commercial litigation, regulatory disputes and regulatory compliance issues.

Since joining the Firm in 2002, Mr. Taylor has remained actively engaged in a multitude of business and corporate litigation matters. This has included the representation of clients in cases involving employment issues, breach of contract claims, shareholder disputes and general governance matters. He has represented businesses in industries ranging from information technology to manufacturing and is also involved in representation of the Firm’s utility clients in matters ranging from condemnation cases to claims for injunctive relief. Mr. Taylor also acts as corporate counsel for J.U.L.I.E., Inc., the Illinois One Call System and Laraway Communications center (911 dispatch center), as well as variety of other mid to large sized regional businesses.

Mr. Taylor also has extensive experience in representing municipalities as well as school districts, colleges and private educational institutions throughout the State of Illinois. He is legal counsel for the Village of Manhattan, Village of Bradley, Village of Grant Park, Village of Crete, the City of Kankakee and is often engaged by municipal clients to handle pending litigation matters and administrative cases.

Mr. Taylor has tried cases in numerous counties throughout the State of Illinois and has handled cases in front of a variety of administrative agencies including the Illinois Commerce Commission, Illinois Department of Human Rights and Equal Employment Opportunity Commission. He has also briefed and argued cases before appellate courts, including the United States Court of Appeals for the Seventh Circuit. He has not only successfully defended high stakes multi-million dollar cases but has also secured the recovery of millions of dollars in the prosecution of cases for clients through settlement and verdicts.

Mr. Taylor has received an AV rating from Martindale Hubbell American Law Directory, the highest rating for legal ability and ethical standards. In 2007, Mr. Taylor was recognized as one of 40 Illinois attorneys under 40 to watch. Mr. Taylor has also been recognized as an Illinois Super Lawyer by the publishers of Chicago Magazine in 2009 and 2010, a designation provided to only 5% of practicing attorneys in Illinois. In 2017-2021 he was selected as a Leading Lawyer in commercial litigation, governmental, municipal, lobbying and administrative law, personal injury, general public utility law: gas/water/electric and school law. The designation of Leading Lawyers is based on peer selection and earned by fewer than 5% of all licensed attorneys within the State of Illinois.

Mr. Taylor is also a Senior Fellow of the Litigation Counsel of America, an honorary trial lawyer society. Fellowship in this organization is composed of less than one-half of one percent of American lawyers and is by invitation only.

Mr. Taylor resides in Will County with his wife and two children. He is involved in a number of charitable organizations and events.