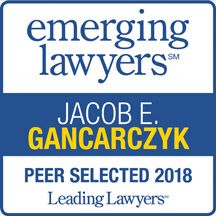 Jacob E. Gancarczyk joined Spesia & Taylor in 2012. He was born and raised in Joliet and resides in Shorewood. Mr. Gancarczyk received a B.A. from the University of Iowa. At Iowa, he achieved Academic All-Big Ten honors and was a member of the 2002 Big Ten Championship football team. Following college, he oversaw multi-million dollar projects as a project manager in the construction industry. He also received a Master’s Degree in business law from the Loyola University School of Law in Chicago where he received the Legal Research and Academic Merit Awards for writing the best thesis and attaining the highest cumulative grade point average in the program.

Since joining the firm, his practice has focused on appellate work and litigation in the following areas of law: eminent domain, industrial land use projects, construction law, contested probate estate, municipal law, personal injury, and medical malpractice cases. He also currently serves as a local prosecutor for several local municipalities.

Mr. Gancarczyk has also been recognized by The Law Bulletin Publishing Company and its Leading Lawyers division as an Emerging Lawyer in Illinois, which recognizes the top two percent of lawyers who are under the age of 40 or practicing law for less than ten years and have proven themselves professional, ethical and experienced at an early point of their career.

Attorneys John Spesia, Kent Slater, and Jacob Gancarczyk successfully overturned an improper jury verdict in a wrongful death case on appeal before the Third District Appellate Court. Lorenz v. Pledge, 2014 IL App (3d) 130137. Spesia & Taylor represented the estate of a deceased woman, a mother of three, and her daughter.  The mother was tragically killed, and the daughter was injured, in a car accident in 2004, after a police officer, who had been pursuing a DUI suspect through a college town at speeds in excess of 100 mph, collided with the passenger side of her minivan.  On remand, John Spesia, Kent Slater and Jacob Gancarczyk handled the second trial, resulting in a favorable jury verdict and a record-breaking award of more than $4.1 million in damages.  This verdict is the highest ever awarded by a jury in the 9th Judicial Circuit.

Attorney John Spesia and Mr. Gancarczyk successfully advocated for their client in a dental malpractice case before the appellate court. Yanello v. Park Family Dental, 2017 IL App (3d) 140926. The favorable decision resulted in the matter settling for their client.