Expert opinion gets reined in one opinion at a time

To some lawyers, all facts are created equal. —Felix Frankfurter 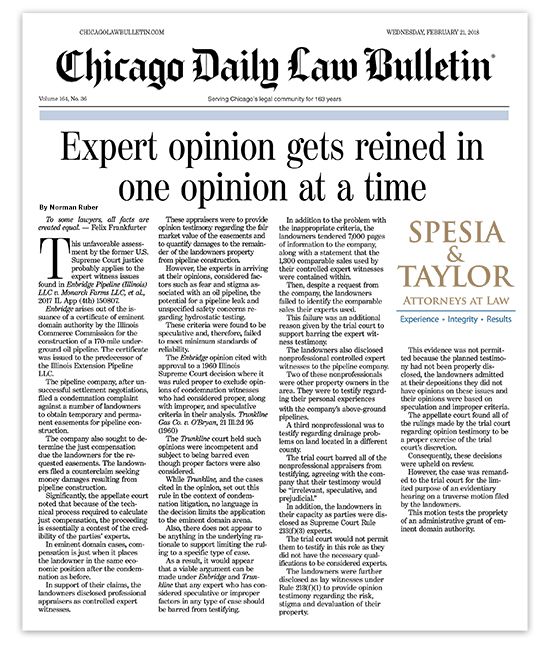 Enbridge arises out of the issuance of a certificate of eminent domain authority by the Illinois Commerce Commission for the construction of a 170-mile underground oil pipeline. The certificate was issued to the predecessor of the Illinois Extension Pipeline LLC.

The pipeline company, after unsuccessful settlement negotiations, filed a condemnation complaint against a number of landowners to obtain temporary and permanent easements for pipeline construction.

The company also sought to determine the just compensation due the landowners for the requested easements. The landowners filed a counterclaim seeking money damages resulting from pipeline construction.

Significantly, the appellate court noted that because of the technical process required to calculate just compensation, the proceeding is essentially a contest of the credibility of the parties’ experts.

In eminent domain cases, compensation is just when it places the landowner in the same economic position after the condemnation as before.

In support of their claims, the landowners disclosed professional appraisers as controlled expert witnesses.

These appraisers were to provide opinion testimony regarding the fair market value of the easements and to quantify damages to the remainder of the landowners property from pipeline construction.

However, the experts in arriving at their opinions, considered factors such as fear and stigma associated with an oil pipeline, the potential for a pipeline leak and unspecified safety concerns regarding hydrostatic testing.

These criteria were found to be speculative and, therefore, failed to meet minimum standards of reliability.

The Enbridge opinion cited with approval to a 1960 Illinois Supreme Court decision where it was ruled proper to exclude opinions of condemnation witnesses who had considered proper, along with improper, and speculative criteria in their analysis. Trunkline Gas Co. v. O’Bryan, 21 Ill.2d 95 (1960)

The Trunkline court held such opinions were incompetent and subject to being barred even though proper factors were also considered.

While Trunkline, and the cases cited in the opinion, set out this rule in the context of condemnation litigation, no language in the decision limits the application to the eminent domain arena.

Also, there does not appear to be anything in the underlying rationale to support limiting the ruling to a specific type of case.

As a result, it would appear that a viable argument can be made under Enbridge and Trunkline that any expert who has considered speculative or improper factors in any type of case should be barred from testifying.

In addition to the problem with the inappropriate criteria, the landowners tendered 7,000 pages of information to the company, along with a statement that the 1,300 comparable sales used by their controlled expert witnesses were contained within.

Then, despite a request from the company, the landowners failed to identify the comparable sales their experts used.

This failure was an additional reason given by the trial court to support barring the expert witness testimony.

Two of these nonprofessionals were other property owners in the area. They were to testify regarding their personal experiences with the company’s above-ground pipelines.

A third nonprofessional was to testify regarding drainage problems on land located in a different county.

The trial court barred all of the nonprofessional appraisers from testifying, agreeing with the company that their testimony would be “irrelevant, speculative, and prejudicial.”

In addition, the landowners in their capacity as parties were disclosed as Supreme Court Rule 213(f)(3) experts.

The trial court would not permit them to testify in this role as they did not have the necessary qualifications to be considered experts.

The landowners were further disclosed as lay witnesses under Rule 213(f)(1) to provide opinion testimony regarding the risk, stigma and devaluation of their property.

This evidence was not permitted because the planned testimony had not been properly disclosed, the landowners admitted at their depositions they did not have opinions on these issues and their opinions were based on speculation and improper criteria.

The appellate court found all of the rulings made by the trial court regarding opinion testimony to be a proper exercise of the trial court’s discretion.

Consequently, these decisions were upheld on review.

However, the case was remanded to the trial court for the limited purpose of an evidentiary hearing on a traverse motion filed by the landowners.

This motion tests the propriety of an administrative grant of eminent domain authority.

By: Michael R. Stiff Spesia & Taylor attorneys Jeff Taylor, and Mike Stiff on July 28, 2021, won a Motion to Reconsider the 2019 denial of a ... END_OF_DOCUMENT_TOKEN_TO_BE_REPLACED

Spesia & Taylor is a proud sponsor of the Will County Legal Opportunity Scholarship Program. The Scholarship awards a $5,000 per year up to three ... END_OF_DOCUMENT_TOKEN_TO_BE_REPLACED