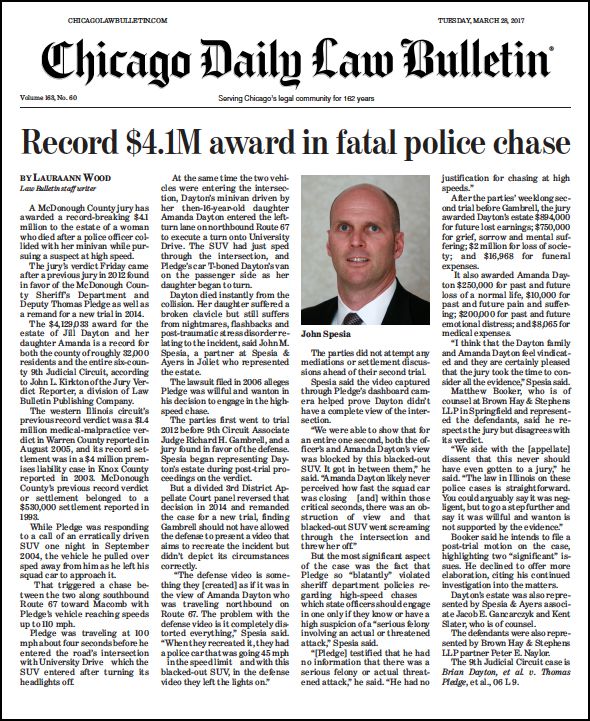 A McDonough County jury has awarded a record-breaking $4.1 million to the estate of a woman who died after a police officer collided with her minivan while pursuing a suspect at high speed.

The jury’s verdict Friday came after a previous jury in 2012 found in favor of the McDonough County Sheriff’s Department and Deputy Thomas Pledge as well as a remand for a new trial in 2014.

The $4,129,033 award for the estate of Jill Dayton and her daughter Amanda is a record for both the county of roughly 32,000 residents and the entire six-county 9th Judicial Circuit, according to John L. Kirkton of the Jury Verdict Reporter, a division of Law Bulletin Publishing Company.

While Pledge was responding to a call of an erratically driven SUV one night in September 2004, the vehicle he pulled over sped away from him as he left his squad car to approach it. That triggered a chase between the two along southbound Route 67 toward Macomb with Pledge’s vehicle reaching speeds up to 110 mph.

Pledge was traveling at 100 mph about four seconds before he entered the road’s intersection with University Drive which the SUV entered after turning its headlights off.

At the same time the two vehicles were entering the intersection, Dayton’s minivan driven by her then-16-year-old daughter Amanda Dayton entered the leftturn lane on northbound Route 67 to execute a turn onto University Drive. The SUV had just sped through the intersection, and Pledge’s car T-boned Dayton’s van on the passenger side as her daughter began to turn.

Dayton died instantly from the collision. Her daughter suffered a broken clavicle but still suffers from nightmares, flashbacks and post-traumatic stress disorder relating to the incident, said John M. Spesia, a partner at Spesia & Taylor in Joliet who represented the estate.

The lawsuit filed in 2006 alleges Pledge was willful and wanton in his decision to engage in the highspeed chase.

The parties first went to trial 2012 before 9th Circuit Associate Judge Richard H. Gambrell, and a jury found in favor of the defense. Spesia began representing Dayton’s estate during post-trial proceedings on the verdict. But a divided 3rd District Appellate Court panel reversed that decision in 2014 and remanded the case for a new trial, finding Gambrell should not have allowed the defense to present a video that aims to recreate the incident but didn’t depict its circumstances correctly.

“The defense video is something they [created] as if it was in the view of Amanda Dayton who was traveling northbound on Route 67. The problem with the defense video is it completely distorted everything,” Spesia said. “When they recreated it, they had a police car that was going 45 mph in the speed limit and with this blacked-out SUV, in the defense video they left the lights on.”

The parties did not attempt any mediations or settlement discussions ahead of their second trial. Spesia said the video captured through Pledge’s dashboard camera helped prove Dayton didn’t have a complete view of the intersection.

“We were able to show that for an entire one second, both the officer’s and Amanda Dayton’s view was blocked by this blacked-out SUV. It got in between them,” he said. “Amanda Dayton likely never perceived how fast the squad car was closing [and] within those critical seconds, there was an obstruction of view and that blacked-out SUV went screaming through the intersection and threw her off.”

But the most significant aspect of the case was the fact that Pledge so “blatantly” violated sheriff department policies regarding high-speed chases which state officers should engage in one only if they know or have a high suspicion of a “serious felony involving an actual or threatened attack,” Spesia said.

“[Pledge] testified that he had no information that there was a serious felony or actual threatened attack,” he said. “He had no justification for chasing at high speeds.”

After the parties’ weeklong second trial before Gambrell, the jury awarded Dayton’s estate $894,000 for future lost earnings; $750,000 for grief, sorrow and mental suffering; $2 million for loss of society; and $16,968 for funeral expenses.

“I think that the Dayton family and Amanda Dayton feel vindicated and they are certainly pleased that the jury took the time to consider all the evidence,” Spesia said.

Matthew Booker, who is of counsel at Brown Hay & Stephens LLP in Springfield and represented the defendants, said he respects the jury but disagrees with its verdict.

“We side with the [appellate] dissent that this never should have even gotten to a jury,” he said. “The law in Illinois on these police cases is straightforward. You could arguably say it was negligent, but to go a step further and say it was willful and wanton is not supported by the evidence.”

Booker said he intends to file a post-trial motion on the case, highlighting two “significant” issues. He declined to offer more elaboration, citing his continued investigation into the matters.

Dayton’s estate was also represented by Spesia & Taylor associate Jacob E. Gancarczyk and Kent Slater, who is of counsel.

By: Michael R. Stiff Spesia & Taylor attorneys Jeff Taylor, and Mike Stiff on July 28, 2021, won a Motion to Reconsider the 2019 denial of a ... END_OF_DOCUMENT_TOKEN_TO_BE_REPLACED

Spesia & Taylor is a proud sponsor of the Will County Legal Opportunity Scholarship Program. The Scholarship awards a $5,000 per year up to three ... END_OF_DOCUMENT_TOKEN_TO_BE_REPLACED