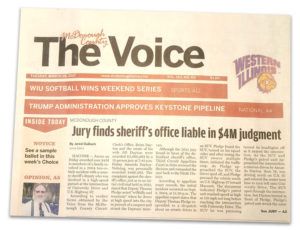 MACOMB — Jurors on Friday awarded over $4M to members of a family involved in a 2004 two-vehicle accident with a county sheriff’s deputy who was involved in a high-speed pursuit at the intersection of University Drive and U.S. Highway 67.

According to verdict forms obtained by the Voice from the McDonough County Circuit Clerk’s Office, Brian Dayton and the estate of his wife Jill Dayton were awarded $3,660,968 by a 12-person jury at 7:45 p.m. Friday. Amanda Dayton-Nehring, was personally awarded $468,065. The complaint against the sheriff’s office, just as in an initial civil trial held in 2012, stated that Deputy Thomas Pledge acted “willfully and wantonly” when he drove at high speed into the city in pursuit of a suspect and struck the Daytons’ minivan.

Although the 2012 jury found in favor of the defendant sheriff’s office, Third Circuit Appellate Court in 2014 reversed the decision and remanded the case back to the Ninth District.

According to appellate court records, the initial incident occurred on Sept. 3, 2004, at 11:30 p.m. The appellate report states that Deputy Thomas Pledge responded to a dispatch about an erratic driver in an SUV. Pledge found the SUV, turned on his squad video and after seeing the SUV swerve multiple times, initiated the traffic stop. As Pledge approached the SUV, the driver sped off, and Pledge pursued the vehicle south on U.S. Highway 67 toward Macomb. The document indicated Pledge’s patrol unit reached speed as high as 110 mph not long before reaching the intersection with University Drive. The SUV he was pursuing turned its headlights off as it neared the intersection. As the SUV and Pledge’s patrol unit approached the intersection, a minivan driven by Amanda Dayton, then 16, was driving north on U.S. 67 and entered the center turn lane to turn left onto University Drive. The SUV sped through the intersection, but Dayton turned in front of Pledge. Pledge’s patrol unit struck the minivan on the front passenger side. As a result, Dayton and rear passenger Mark Lorenz received injuries. Dayton’s mother, Jill, was killed as a result of injuries sustained in the collision.

Read the full article at
http://www.mcdonoughvoice.com/news/20170328/jury-finds-sheriffs-office-liable-in-4m-judgment

By: Michael R. Stiff Spesia & Taylor attorneys Jeff Taylor, and Mike Stiff on July 28, 2021, won a Motion to Reconsider the 2019 denial of a ... END_OF_DOCUMENT_TOKEN_TO_BE_REPLACED

Spesia & Taylor is a proud sponsor of the Will County Legal Opportunity Scholarship Program. The Scholarship awards a $5,000 per year up to three ... END_OF_DOCUMENT_TOKEN_TO_BE_REPLACED