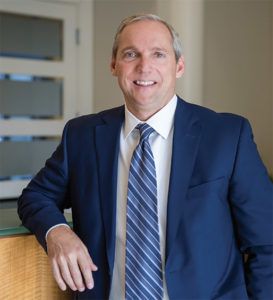 JOLIET—When Christian G. Spesia was a child, Joliet was a city separated from Chicago by miles of farmland.

Today, the suburbs are knocking at Joliet’s door. And much of that development in the past 24 years in the communities represented by Spesia & Taylor came with the help of Spesia.

That includes newsworthy projects such as the Cooper’s Hawk Winery built on a former field in New Lenox, Silver Cross Hospital in New Lenox, the ProLogis Industrial Park in Minooka and an expanded $9.5 million Blue Ribbon distribution center in a business park in Joliet.

“Growing up in Joliet, no one ever considered Joliet a suburb of Chicago, but in the last 20 years, we have definitely become part of suburbia,” Spesia says. “The towns we represent have all experienced huge growth.”

That includes Joliet’s neighboring communities such as New Lenox, Crest Hill, Manhattan and Minooka. Families who built in those sleepy towns 20 years ago knew they would be driving 20 minutes or longer for a trip to the grocery store. Today, they have their pick of grocers in town.

“We were with them through all that growth,” Spesia says.

After all, the Spesia family has deep roots in Will County. Spesia & Taylor itself dates back to 1899, and more recently was run with Spesia’s father, Douglas, and his partner, Kent Ayers, at the helm. Today, brothers Chris and John Spesia, along with their partner Jeff Taylor, continue to invest in their community as their firm helps the communities around them to strategically grow.

A former college linebacker, Spesia draws even today on the skills he learned on the field. The game taught him perseverance, teamwork, leadership and a solid work ethic.

But it’s the longevity and commitment to the Joliet area that Spesia says sets his firm apart.

“People can see through someone who talks a big game but doesn’t back it up,” he says. “We are committed.”

Douglas Spesia might not have realized it, but his children kept a close eye on him as they grew up. Spesia watched his father’s practice— heavily representing utility companies—and admired the man he was. After graduating from Colorado College and the University of Denver College of Law, it was an easy choice to return to Joliet and work in his dad’s firm.

“As a person and as an attorney, he definitely was who we aspired to be,” Spesia says. “My dad was really good about accepting us and bringing us into the business. His partner Kent Ayers became like a second dad. Both of them were great mentors.”

Even as professionals, Chris and John Spesia took cues from their father.

“He had a really personal touch, so I try to incorporate that,” Spesia says. “He always had relationships with clients, and he knew all about them. He was very diligent—it doesn’t matter if it was the smallest transaction or the largest, you treat everything the same way.”

As Douglas focused on utility work, along with estates and trusts, John came in and now leads the firm’s litigation practice while Chris created his niche with the firm’s municipal clients and utility clients with a focus on the transactional work. Today, Chris still manages some of his father’s estate and trust practice.

Working with the firm’s utility and pipeline clients, Chris has handled transactions involving the sale of pipeline assets and has represented a utility company before the Illinois Commerce Commission and in the acquisition of a water system that serves 44,000 residents. He also helped some of the world’s largest pipeline companies secure zoning and permitting for meter stations and other improvements in Will, Livingston, LaSalle, Bureau and Boone counties.

“Joliet is a regional hub for gas and oil pipelines, so the firm has a niche in that area of practice,” he explains.

And as it happens, running a business with his older brother has turned out to be an asset for Spesia.

“We grew up butting heads at times but grew close with shared interests and friends in high school and college. On a professional level, it’s nice to know someone is always looking out for you,” Spesia says. “We take a lot of pride in the fact that we transitioned from our dad’s leadership to our leadership.”

Now age 50, Spesia is very much aware of his role in continuing his family legacy. He wants to see Spesia & Taylor continue to grow and add skilled attorneys. The goal, he says, is “when my brother, Jeff and I leave, the practice still continues.”

One client who has carried through the generations is Don Londergon of Blue Ribbon Products. The Joliet distributor previously was run by Londergon’s father—and represented by Spesia’s father.

“I have known him and his family since I was a child,” Londergon says. “Chris is very thorough. He leaves nothing to chance. When he completes a project for me, I just know it was done correctly and completely.”

Londergon also appreciates Spesia’s ability to communicate in a way he understands. When expanding and relocating his distribution center to a local business park in 2017, Londergon says his lawyer walked him through each step of the process.

“He has the ability to explain complex legal situations in a way that can be readily understood,” Londergon says. “That is an important quality in an attorney.”

GROWING AS A COMMUNITY

When Spesia drives down U.S. 30 through New Lenox, he sees a small town that once was surrounded by farm fields now transformed. He had a hand in the vision that shaped much of this town, which grew with the housing boom. Now he sees a Target where a field used to be, a Portillo’s on what used to be empty land. It’s one of the most satisfying parts of his job.

“When there’s a good result, you have something tangible,” he says. “You can drive by and say, ‘That’s the fruit of my labor.’”

But what he enjoys even more than the physical change is the relationship-building that comes through developing such projects. He tries to be more than a face at city council meetings. He wants to be an invested part of their communities.

As a municipal attorney, Spesia has been involved in the annexation, rezoning and development of thousands of acres on behalf of the firm’s municipal clients. He has gained experience in tax increment financing, business development districts and special service areas.

Lately, redevelopment projects have been a large part of the work he has done for the Village of New Lenox, says Mayor Tim Baldermann.

“Chris will always diligently find a workable solution to most any issue that arises,” Baldermann says. “He will never compromise his ethics but will always do extensive research to give us the best options available.”

Baldermann met Spesia 17 years ago when he was first elected a village trustee. Now, he relies on Spesia’s advice as he actively gathers community buy-in.

“It’s extremely important to me that I am transparent and honest with the people I serve,” Baldermann says. “With Chris providing the legal advice, I know I can speak with confidence about any topic I’m addressing the constituency with. I never have to question his motivation. He prides himself on being thorough and precise in his opinions.”

Repeatedly over the years, Spesia has been at the forefront of development as New Lenox grew.

“We are a village government that believes in partnering with developers in order to keep our community growing,” Baldermann says. “These agreements can be very complex and, if not handled appropriately, could put substantial taxpayer money at risk. Chris has repeatedly handled these complicated matters with extreme confidence. His knowledge and ability to think several steps ahead are contributing factors to our community’s success.”

GROWING IN THE COMMUNITY

Spesia is a big part of seeing his community succeed as well when away from the office.

He and wife Meredith have six children — three boys and three girls, ages 11 to 22. As did his father, Spesia is committed to not pushing any of his children into becoming lawyers.

“He didn’t want us to get into the law or his firm unless we were taking ownership of it and wanted it for ourselves,” he recalls.

But he does want to see his family active in making Joliet a better place to live. The Spesia family has been involved in Catholic Charities’ Daybreak homeless shelter, as well as the Joliet Diocese and their parishes and schools.

Additionally, after his father’s death eight years ago, their family launched a community center and Montessori school in Malawi, Africa.

“We’ve been blessed,” he says. “We have to pay that forward.”

One key way Spesia has done that is through serving on the board of directors for the Community Foundation of Will County. He initially took over his father’s spot on the board when he died but quickly made it a passion of his own.

“What began as filling a slot has become a place for him to grow in his own service back to our community,” says Michael Trench, executive director of the Community Foundation of Will County. “That is simply a part of who he is.”

Spesia serves on the Grant Review Committee, where Trench says his concern for others is clear.

“One of the things I recognized and appreciated in him right away was his empathy for others and a high level of integrity,” Trench says.

And while having a lawyer serve on the board is helpful because of his decisionmaking abilities and professional resources, this particular lawyer brings something more.

Spesia contributes to the foundation, Trench says, with “a genuine spirit of service, a desire to help others in times of need, and a dedication to improving the quality of life in our community.”

By: Michael R. Stiff Spesia & Taylor attorneys Jeff Taylor, and Mike Stiff on July 28, 2021, won a Motion to Reconsider the 2019 denial of a ... END_OF_DOCUMENT_TOKEN_TO_BE_REPLACED

Spesia & Taylor is a proud sponsor of the Will County Legal Opportunity Scholarship Program. The Scholarship awards a $5,000 per year up to three ... END_OF_DOCUMENT_TOKEN_TO_BE_REPLACED