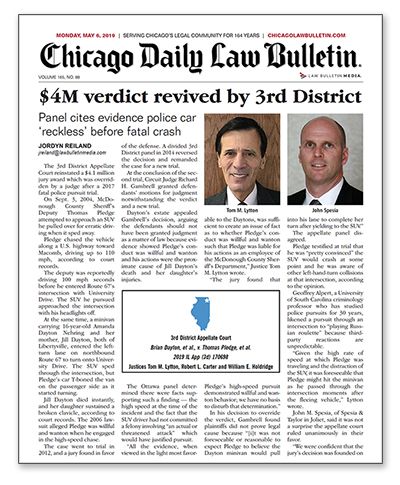 The 3rd District Appellate Court reinstated a $4.1 million jury award which was overridden by a judge after a 2017 fatal police pursuit trial.

On Sept. 3, 2004, McDonough County Sheriff’s Deputy Thomas Pledge attempted to approach an SUV he pulled over for erratic driving when it sped away. Pledge chased the vehicle along a U.S. highway toward Macomb, driving up to 110 mph, according to court records.

At the same time, a minivan carrying 16-year-old Amanda Dayton Nehring and her mother, Jill Dayton, both of Libertyville, entered the leftturn lane on northbound Route 67 to turn onto University Drive. The SUV sped through the intersection, but Pledge’s car T-boned the van on the passenger side as it started turning.

Jill Dayton died instantly, and her daughter sustained a broken clavicle, according to court records. The 2006 lawsuit alleged Pledge was willful and wanton when he engaged in the high-speed chase.

The case went to trial in 2012, and a jury found in favor of the defense. A divided 3rd District panel in 2014 reversed the decision and remanded the case for a new trial.

At the conclusion of the second trial, Circuit Judge Richard H. Gambrell granted defendants’ motions for judgment notwithstanding the verdict and a new trial.

Dayton’s estate appealed Gambrell’s decision, arguing the defendants should not have been granted judgment as a matter of law because evidence showed Pledge’s conduct was willful and wanton and his actions were the proximate cause of Jill Dayton’s death and her daughter’s injuries.

The Ottawa panel determined there were facts supporting such a finding — the high speed at the time of the incident and the fact that the SUV driver had not committed a felony involving “an actual or threatened attack” which would have justified pursuit.

“All the evidence, when viewed in the light most favorable to the Daytons, was sufficient to create an issue of fact

as to whether Pledge’s conduct was willful and wanton such that Pledge was liable for his actions as an employee of the McDonough County Sheriff’s Department,” Justice Tom M. Lytton wrote.

“The jury found that Pledge’s high-speed pursuit demonstrated willful and wanton behavior; we have no basis to disturb that determination.”

In his decision to override the verdict, Gambrell found plaintiffs did not prove legal cause because “[i]t was not foreseeable or reasonable to expect Pledge to believe the Dayton minivan would pull into his lane to complete her turn after yielding to the SUV.” The appellate panel disagreed.

Pledge testified at trial that he was “pretty convinced” the SUV would crash at some point and he was aware of other left-hand-turn collisions at that intersection, according to the opinion.

Geoffrey Alpert, a University of South Carolina criminology professor who has studied police pursuits for 30 years, likened a pursuit through an intersection to “playing Russian roulette” because thirdparty reactions are unpredictable.

“Given the high rate of speed at which Pledge was traveling and the distraction of the SUV, it was foreseeable that Pledge might hit the minivan as he passed through the intersection moments after the fleeing vehicle,” Lytton wrote.

John M. Spesia, of Spesia & Taylor in Joliet, said it was not a surprise the appellate court ruled unanimously in their favor.

“We were confident that the jury’s decision was founded on what we believed was overwhelming evidence of reckless conduct,” he said.

In addition to reinstating the verdicts, the appellate court awarded post-judgment interest from the date of the final judgment totaling more than $500,000, Spesia said.

By: Michael R. Stiff Spesia & Taylor attorneys Jeff Taylor, and Mike Stiff on July 28, 2021, won a Motion to Reconsider the 2019 denial of a ... END_OF_DOCUMENT_TOKEN_TO_BE_REPLACED

Spesia & Taylor is a proud sponsor of the Will County Legal Opportunity Scholarship Program. The Scholarship awards a $5,000 per year up to three ... END_OF_DOCUMENT_TOKEN_TO_BE_REPLACED